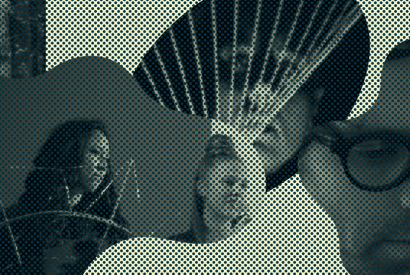 Three talks from key artists of this year’s NEXT will shine a light on organic juxtapositions of art and science in multimedia art and performance.
Michela Pelusio will introduce her groundbreaking work in the talk titled Beyond SpaceTime Helix which will look into the backstage of the performance she will present on Saturday at A4. Via close look on their work Martin Messier and Magnetoceptia will both offer an intriguing look on sonification of electromagnetic fields and it’s role in their multimedia performances.

Martin Messier
In his latest project FIELD, composer, performer and videomaker Martin Messier assumes it is possible to create sounds using electromagnetic fields in our environment. These residual and imperceptible electric signals are picked up by electromagnetic transducer microphones, and become the generators of his performance. On stage, he plays with two connections patches that offer many possibilities of connecting various outputs and inputs. By a continuous movement of plugging and unplugging, Messier interacts with them, with noise and light compositions emerging thereby. With FIELD, Messier materializes a flow of power that is otherwise inaudible and invisible.

Michela Pelusio
SpaceTime Helix is an audiovisual performance with a giant spinning standing wave in a white string, forming a large helicoid. The helix surface is bright and transparent, with waves running over it, disappearing into the future, more and more distant in space-time.�� This work explores helical symmetries and infinity, frequencies and geometry, elementary particles and quantum physics, sonic visions and perceptions.
This work is a metaphor for the return to the root of things, and to the simplicity and the complexity of the macro and microcosmos, the internal and external space, the architecture of the mind and the architecture of nature.

Magnetoceptia is a series of performances and installations revolving around self-constructed, wearable antennas that pick up electromagnetic fields and make them perceivable through sound. It is a collaborative project by Patrizia Ruthensteiner (AT) and Dewi de Vree (NL).
The project is an investigation of the different sonic and material properties of natural environments contrasting urban landscapes, and a visualization of different physical phenomena. During the performances the sound is generated and modulated live by the antennas, which, depending on their shape, size and dimensions pick up different radio signals. The movements of the performers determine the sound, dismantling traditional concepts of stage, musician and instrument.